“A magic was at work in new Parco, a zest for life that infected everyone in and near the infant town. Denver Post and local reporters called Parco “the newest”, “the most modern”, “the finest”, and “the friendliest”. Energetic, pulsing life poured through Parco from the moment of ground-breaking in 1922.

In 1922, Frank Kistler, the head of Producers and Refiners Corporation (P&R Co.), came here to check out the area for a suitable refinery location. In October 1922 ground was broken for the refinery. Officials of the company stayed in Rawlins, west of Parco, however, the workmen lived in primitive shacks and tents on the south side of track in so called Rag Town.

The talks about building the new homes for refinery employees lasted from November 1922 through February 1923. In the meantime, P&R Co. bought up all the land adjacent to refinery site to use it for townsite purpose. The constructions started.

On March 13th, 1923, at 3:30pm the refinery started up. By April the information spread, and mail started flooding the refinery post office using initials of P&R Co. – this was the first time the name PARCO was officially used. And it stayed like that until 1943 when the name was changed to SINCLAIR.

From then the things just started happening. Parco residents dug, troweled, hammered and sawed their way through1924, constructing most of the buildings still seen in the town today. Threes were planted, stores opened, and the first general election was held. The people worked as hard at recreation as they did at earning a living. Church services were begun, baseball teams were active, dancing continued, and the library and the movie theatre opened.

On October 9th, 1924, the American flag was raised. It was over 100 feet high, and it was the tallest flagpole in Carbon County at that time.

Visitors to Sinclair will find beautiful and imposing structures, all following the same general Spanish architectural style in several buildings and residential sections. Most original town sites are listed in the National Register of Historic Places. (Wyo. place #250.)

A large unique fountain rests in the town plaza, erected in 1927 to honor Parco's founder, Frank E. Kistler. The fountain was recently renovated and is on all summer.

The complete history of Town of Parco/Sinclair can be found in the booklet “Town of Sinclair 1925-1993” available to purchase for $5 at the Townhall. 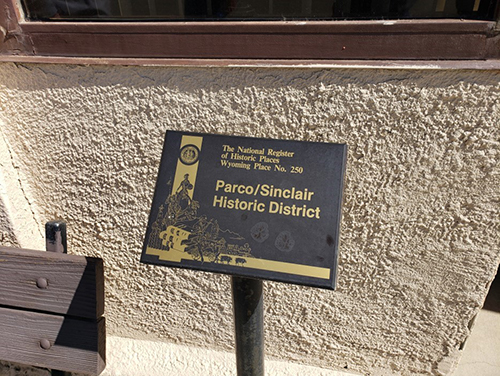